Tech shares were the top performers on the S&P 500, propelling the blue-chip benchmark to close 1 per cent higher, while the tech-focused Nasdaq Composite index gained 1.4 per cent.

Energy stocks also climbed after Goldman Sachs forecast Brent crude, which leapt 3 per cent to $68.45 a barrel on Monday, would reach $80 this year as economies recovered from the pandemic.

Wall Street was rattled last week by the prospect that a cryptocurrency rout could ripple into other asset classes. Bitcoin fell 13 per cent on Sunday, before rising 18 per cent on Monday, although it remains roughly 38 per cent below its April peak.

Analysts are examining correlations between trends in cryptocurrency and other financial markets, such as richly valued tech stocks, citing the possibility that investors who borrowed money to trade digital currencies could sell other assets to offset losses.

“The cross-asset consequences have been mild,” said John Normand, strategist at JPMorgan. But he warned that a deflation of what he said was a $2tn market could create “a substantial wealth loss, which can impact the real economy by impairing the balance sheets of households, corporates and the banking sector”.

The People’s Bank of China has warned financial institutions against using digital currencies for payments while the US government said cryptocurrency transactions exceeding $10,000 should be reported to tax authorities.

The S&P has traded choppily since closing at an all-time high on May 7. Almost nine out of 10 S&P-listed companies beat earnings forecasts for the first quarter, according to DataTrek Research.

US equities would remain volatile, DataTrek’s Nicholas Colas said, until companies reported second-quarter results and investors could assess whether the first three months of this year represented the peak of the recovery from last year’s industry shutdowns.

“The volatility you see in stock prices day to day is the tug of war between earnings bulls and bears,” Colas said. 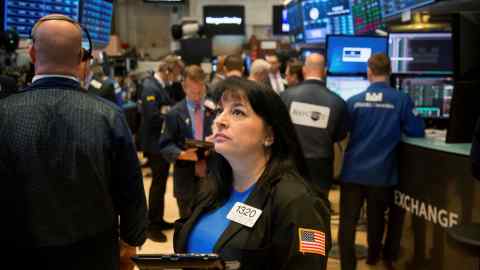 This yield, which sets the tone for equity valuations and global borrowing costs, has risen from about 0.9 per cent at the start of the year. It has stayed within a narrow range for the past month as Federal Reserve rate-setters repeated a long-held message that jumps in inflation would be transitory as the US economy recovers.

“But it is going to be more of a gradual slowdown,” he added, as investors in the eurozone and Japan, where income yields from government bonds are lower, “find 1.6 per cent quite attractive”.

In currencies, the dollar index fell 0.2 per cent. The euro added 0.3 per cent against the dollar to $1.2217, remaining around its highest point since January.

Robert Armstrong dissects the most important market trends and discusses how Wall Street’s best minds respond to them. Sign up here to get the newsletter sent straight to your inbox every weekday